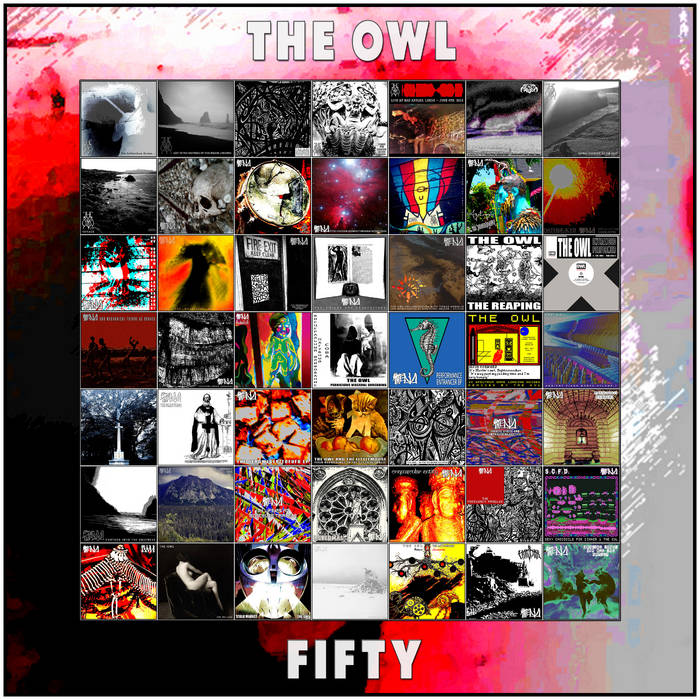 The Owl album 'FIFTY' was made using all 353 songs I previously released on the first 50 records. The first 49 use all or parts of the songs on each release, and the 50th uses all those 49.

The album took around 300 hours over the course of 8 weeks to make... and now I am making videos for all those tracks, mostly using each release's cover image, to eventually make a full film.

You can see the first 3 of them here: www.youtube.com/watch?v=omWqiMsGHz4

Parts are recognisable from the original songs, some absolutely not, and I tried to then put them all together as coherent tracks in a cohesive album (especially difficult when there were 49 differing original productions and styles involved!), with new titles based on something to do with the original release and the new sound.

Not sure how many explosions there are, but there's a LOT!

This is a compilation, a remix album and new album all in one go. Other people make 'Best of' albums, I've made an 'All of'.

The 'LYRICS' tab has a run down of the style of every original release, in case you fancied a quick 'guide' through what has been happening.

Inspired by the likes of Mr Bungle (especially Disco Volante), Buckethead's more collage cut up work, Abeleresa's mammoth 13 hour 'Dying & Deceased', Igorrr, Venetian Snares, and I guess, myself, but, literally everything I've ever listened to, all flashed before my brain again like it was my dying moments, but then the end is like the rewind back into reality, left to ponder what to do from here...

At first I was quite gutted that the thought popped into my brain. This has been a lot of work to put it together in that time, and it has been really weird revisiting every track I've done. The temptation to remix / remaster all of them was huge, but, once I got going with it, I was so happy I did.

I hope you will enjoy this swift journey through everything I've released over the last 31 months, and if you've listened to The Owl before, I hope it was fun to try and spot parts of the songs here and there... and please, pass it on to others who might be interested.

Gear used: Orange Tiny Terror, Ampeg 6x10 (2), Peavey Century 200H, Digitech Delay, Boss ODB2, Digitech Death Metal, EHX NanoPOG, Ibanez GSR200 5 string, mostly recorded on phones or Zoom H1 Recorder, arranged using Wavepad and Reaper (older stuff made on Guitar Pro and Fruity Loops) on 3 laptops (one of which fell into a coma whilst making the video for 15, thankfully it has recovered, but struggles to breathe from time to time!)

THE GUESTS
- Blanka The Littlemouse: Piano, vocals, accordion, keyboard, bass, bottles, blender, beans, hammers on 32 and 47
- Tomáš Homolík: Drums on 19
- Morgan Freeman: 'Keep Going' encouragement on 29
- Gene Belcher: Voice on 38
- Aubzagl: Band on 6 (including me)
- Gets Worse: Band on 12 (including me)
- Mick of The Afternoon Gentlemen: Joogidyboog on 12
- David Calder: Voice on 30
- The main cast of 'Osobennosti Nacionalnoj Ohoty' film who sing the wonderful Chernyy Voron (Black Raven) song better than anyone.
- Shout out to the ambulance that went by around 2am whilst recording The Recluse (44), you can clearly hear it on this new version!
- All the other film and TV samples used are absolutely not audible, so I will curtail this huge wedge of text here.

THANK YOU SO MUCH!! For reading this far, for listening to these and any past sounds, for downloading / grabbing the discography / buying CDs / sharing / to labels releasing things! It's all always massively appreciated and a lovely surprise any time it happens! The support for this project has been absolutely astounding and continues to blow my mind!

So.... As always, thank YOU for joining me on this journey.